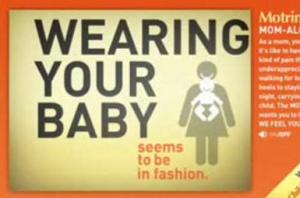 Anyone with an interest in social media has by now heard about the blow up over the Motrin Moms commercial. For those that missed the boat, McNeil Consumer Health Care, the maker of Motrin, released a snarky ad that poked fun at Moms who merely use front slings as a fashion statement while positioning Motrin as a solution to the aches and pains that come with the trend.

Outraged moms who took offense to the ad teamed together on Twitter to let their voices be heard. From there, the fire was fueled throughout the blogosphere to YouTube and beyond (it even triggered this immediate Motrin Ad Alternative spin off). By Sunday night, the ad was removed the Motrin’s PR team kicked into crisis communications gear.

Jeremiah Owyang and Troy at Travel 2.0 both provided nice assessments of the situation.

To be honest, I’m a bit torn. Motrin’s brand managers and ad team could have obviously done a better job researching moms and utilizing a collaborative approach via social media to gather feedback from Moms. Given the community power of the Mom demographic and presence throughout the Web, targeting a key number of influential Mom bloggers to preview the ad and provide feedback would’ve been a preferred course of action.

Easy to look at in retrospect. And no, it probably wasn’t the best idea to launch the campaign on a Friday. Unless you have a social media manager that is willing to sit with their eyes glued to the screen and ready to enter into 24/7 monitoring and response mode for the duration of a weekend, probably best to hold off until the next work week.

Motrin. I’ve maybe used it few times. I recall my folks using it time and again for various aches and pains. I just became a lot more aware of Motrin and have every reason to trust they still put out a good product that does the job.

Talk about an unintended brand catapult. Poke around the Web and you’ll likely find that not everyone thinks this is the worst thing in the world for their brand. Yes, Motrin offended a portion of their key demographic. In many cases, I think generalizations were made and the ad was taken way out of context. But, they responded as soon as possible, removed all official ad placements and posted an apology on their site right away. From here, Motrin is sitting on a prime opportunity to either:

A) Fall by the wayside and be characterized by this one flare up.

B) Use this as a learning experience and come back full speed ahead with a new campaign or creative idea to demonstrate active online community engagement.

Lessons Learned – Pay attention to your community and target demographic, solicit feedback prior to launch, put a proactive response plan in place, respect the influential power of social media and most importantly…when life gives you lemons, tweet back to prevent a crisis!